Create an Account - Increase your productivity, customize your experience, and engage in information you care about.

The City of St. Marys was legally established in 1823, incorporated in 1834, and became a city in 1904. Elected in 1834, Judge Stacy Taylor was the first mayor of St. Marys. View the St. Marys historic photo gallery.

Lemon Gray Neely, the town's first millionaire, donated the land for the new school. He asked that the name "Memorial" be used for the new school as a tribute to his late wife. St. Marys Memorial High School opened in 1924 and graduated its first class in 1925. McBroom Jr. High was built in 1952 and named after Charles C. McBroom who had served 39 years as Superintendent plus additional years as a teacher.

Before the white men ever came to the area, Indians found the St. Marys River to be an important travel route. By portages of only six miles at high water and 26 at low water they could travel all the way from Lake Erie to the Gulf of Mexico. Before the construction of Grand Lake St. Marys, which drained about half of the river's watershed area, the river could handle the largest flat-bottom boats.

All of Gen. Mad Anthony Wayne's supplies for this army traveled the St. Marys River. Before the Miami and Erie Canal, all supplies coming into western Ohio came on the river route. Consequently, since St. Marys was a portage point on this trail, it is plain to see that the locale played an important part in the development of the Northwest Territory.

Because of the traffic, the renegades Simon and James Girty set up a trading post in what is now St. Marys, and the community came to be known as Girtystown, the name by which it continued to be known until 1823, when St. Marys was legally established. In 1794, Gen. Wayne built a fort and drove away James Girty, who was considered an evil man involved with Indian raids. The first white settler, Charles Murray, moved in then. Later a second fort called Fort Barbee was ordered built by Gen. Harrison and was reputed to be the most important military post in Ohio.

In 1818 an Indian treaty was signed, which opened the way for more settlers. Some of the soldiers who had come here with Gen. Wayne liked the area so much that, after their military service was completed, they returned here to make their homes. Among them was Capt. John Armstrong, who settled south of St. Marys on Greenville Road. Members of the Armstrong family played an important part in the early development of this area.

St. Marys was founded by Charles Murray, William Houston and John McCorkle in 1823. They bought 400 acres of land from the government and laid out the village of 68 lots, extending from Perry Street on the west to Front Street on the east, North Street on the north and South Street on the south. Main Street, a part of the Anthony Wayne Trail, was expected to be the main street of the town. But with the opening of the Miami and Erie Canal, completed in 1845, the town expanded eastward, with businesses opening up near the canal, which became the main artery of transportation. Spring Street, named because of the natural spring along the roadway, then became the main thoroughfare.

Grand Lake St. Marys came into being as a reservoir to supply water for the Miami and Erie Canal. It was begun in 1837, long before the days of mechanized equipment. The lake was constructed by men wielding shovels and axes - they cut down trees in the great swamp, which was to be a natural storage place for the water needed to supply the canal and operate its locks. Seventeen hundred men, mostly Irish and German immigrants, were employed in building the east and west banks of the reservoir. They worked from sunrise to sunset. Their wages amounted to 30 cents a day plus one jigger of whiskey (much relied on to combat malaria). 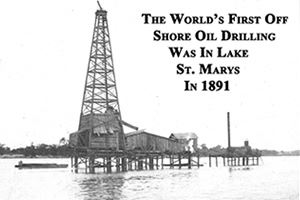 With the opening of the canal, men and women of German heritage came here on canal boats from Cincinnati, and soon had acquired land for farming. Earlier settlers were mostly of English, Irish and French heritage. The completion of the canal and its fee-reservoir also made a vast difference in living costs. Freight rates dropped from $1 for hauling a bushel of wheat 100 miles to 15 cents for hauling a ton of wheat the same distance. The canal did a thriving business until it was supplanted by the railroads (the Norfolk and Western Railway was constructed through St. Marys in the late 1860's). In 1888 and 1889, oil was discovered in the St. Marys area and many wells were drilled during the oil boom that followed. Some of the wells were drilled in Grand Lake St. Marys, whose surface was once studded with derricks.

Grand Lake St. Marys is a part of the divide between the north and south waterways of the canal. Water flowing out of the canal to the east went eventually to Lake Erie and the other Great Lakes, while water flowing south and west found its way into streams and rivers (the Ohio River, for one) that are a part of the Mississippi River system.

From its completion in 1845 until 1915, the lake provided this area with some of its most colorful history. In 1915, however, the lake was no longer needed to feed the canal. The Ohio General Assembly at that time passed an act through which this body of water and adjacent lands owned by the state were dedicated and set apart forever for the use of the public, as public parks or pleasure resorts. Grand Lake St. Marys State Park is one of the busiest tourist areas in Ohio with approximately 700,000 visitors to the park each year.

Miami and Erie Canal Still a Wonder to Behold

At the top of the list of historical attractions in and around St. Marys is the Miami and Erie Canal. The canal, a marvelous feat of engineering when it was built in the early 1800's, is still a wonder today. Surrounded by a veritable plethora of natural beauty - mulberry trees, lily pads, blackberry bushes, reeds and rushes - the canal and its sidekick, the towpath, are a delight to see and leisurely stroll along.

According to the compiled history of the canal, as published by the Miami and Erie Canal Society, construction of the waterway, which stretched from the Ohio River on the south to Lake Erie on the north, began July 12, 1825. It took more than 500 men two years to build just one 15-mile stretch of the 248.8 mile-long ditch. Men worked from sunrise to sunset to construct the canal, which cost approximately $8,062,680 to build. The waterway was dug by men using only picks, shovels and wheelbarrows.

Two guard locks and 103 lift locks allowed boats to move up and down the canal, and it was designed so that the Loramie Summit (the highest point of the canal) was more than 500 feet higher than the Ohio River and 400 feet higher than Lake Erie. The canal had a minimum water depth of four feet, and the towpath for horses that pulled the canal boats was about 10 feet wide.

Many other businesses were built along the canal in the St. Marys area. There was a gristmill and a lumber yard/sawmill, a linseed oil mill and woolen mill - all of which were run by water power. A large basin where the present Chestnut Street Parking Lot is located was surrounded by businesses, including a slaughterhouse, blacksmith shop and livery stable.

According to a history of the canal compiled by various area residents, the growth of St. Marys was in direct proportion to the canal period between 1830 and 1900. It was, by definition and actual fact, a canal town. Area lakes - Grand Lake St. Marys, Lake Loramie, and Indian Lake - were all built as feeder reservoirs for the canal. Grand Lake St. Marys provided water for the canal's northern leg, and Lake Loramie and Indian Lake fed the southern portion of the waterway.

The canal's use began diminishing in 1913 when a disastrous flood hit the canal area, causing extensive damage to it. In the ensuing years, the State turned the reservoirs into recreation areas. A visitor walking along the towpath near Minster, St. Marys and Spencerville can still see the beautiful water, magnificent mulberry trees and abundant water life.

In recent years the City of St. Marys has conducted a rehabilitation project in uptown St. Marys that will enhance many areas along the Miami and Erie Canal. The dilapidated Cotton Mill buildings were razed to once again expose Lock 13, a structure that had been hidden below the Cotton Mill buildings for over 75 years. Lock 13 was restored in 2009 and will be complimented with pedestrian walkways featuring paver bricks and period style lighting, landscaping, and signage reflecting historical aspects of the Canal area. The Miami and Erie Canal now offers a scenic pathway from K.C. Geiger Park into the center of the City and Memorial Park, along the restored Lock 13 area, and North to Forty Acre Pond and Lock 14.